skip to main | skip to sidebar

How (not) to Ditch That Bitch

Raise your hand if you've ever had somebody break up with you for a ridiculous reason. Ok, hands down. Now raise your hand if the way that you were dumped was absurd. Im not talking absurd like via text message from the person while their sitting 3 seats behind you in math class on the day of homecoming, im talking more along the lines of a picture of a giraffe in place of an explanation. Now that's creative! Don't get me wrong, im not suggesting that nobody deserves a large public billboard declaring them a slimeball, because some certainly do deserve it. What I am suggesting is that not all break-ups are reasonable or make sense, some even verging on or surpassing totally ridiculous, and that this sometimes provides us (the uninvolved persons of internet anonymity) with excellent comedic material! 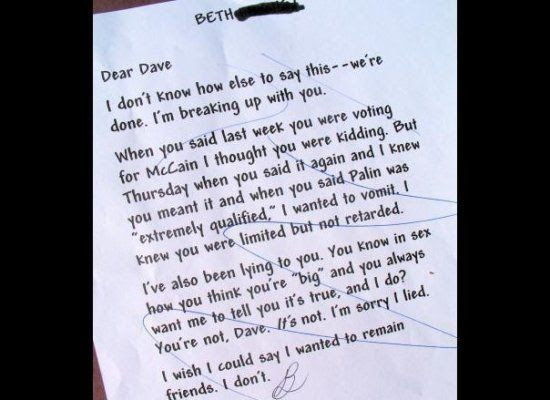 Although a letter may not have been the way to go (and the ending is a little harsh), I am not going to lie, I do not think that dumping somebody for their political view is out of line. Elections are VERY important, wether we like it or not, and an entire freaking country is run based on our political choices, so whats not to understand? Somebody's political views say a decent amount about who they are (yes they do, don't kid yourself), and all break up's are because of who somebody is. Had my boyfriend chosen to vote McCain, I would have been violently sick, dumped him, then gotten in the shower for 3 days straight. Anybody who would put the fate of a country in the hands of somebody like that is not cool with me.
"Limited" made me laugh. What a great way to tone-down saying that somebody is not very bright! I can think of sooo many occasions when I couldn't find the right words, and that would have been PERFECT!

Poor Brad. Didn't realize Frankfurter had his webcam on, did you? (Audience: Castles don't have webcams!) I wouldn't know how to explain that to my fiancee either!
I can't decide if I love this guy or hate him. I mean, just the fact that he even came up with this is undeniable proof that he's awesome, but even awesome people are sometimes a**holes. 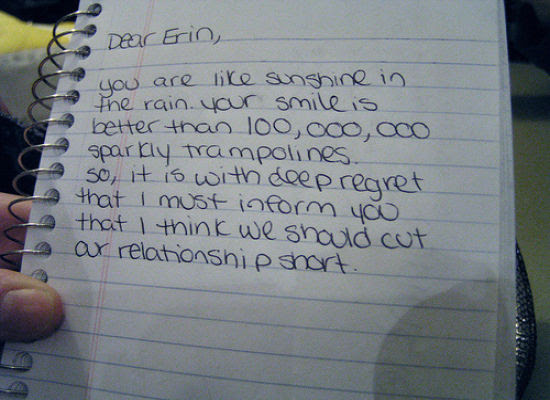 I don't have much to say about this one... still to busy puzzling over 100,000,000 sparkly" trampolines"... If the handwriting weren't different i'd wonder if the infamous 2F was behind this one as well! 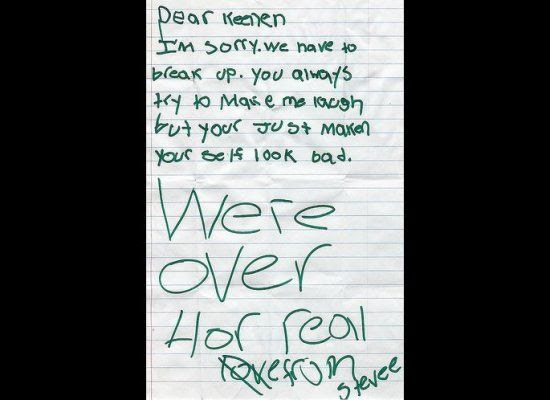 I wasn't previously aware that 8 year olds had jumped on the break-up-letter bandwagon... but clearly that is the case! The recipient can't have been to torn up though, after all, who would want to keep dating somebody that spells for "4or"???

The P.S. made me laugh at first, but then I had to wonder, who's dog was it? It can't have been his or no explanation would be needed, so it was either hers or they owned it together. If it was hers, that's pretty awful... unless it truly did hate her. If they owned it together, well, I can't feel sorry for anybody because she should known that it's always a really stupid idea to share ownership of an animal with a significant other (unless married). Same goes for babies, except that ownership would be the wrong term then. 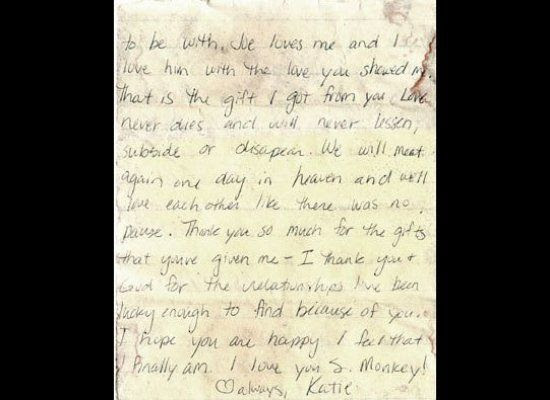 Might be a little hard to read so I will do it for you... with commentary! Yay!
"-to be with. Joe loves me and I love him with the love you showed me. That is the gift I got from you...Love." Well that's real classy... Oh wait, no it's not, that right there makes you a bitch. "It never dies and will never lessen, subside or disappear. We will meet again one day in heaven and we'll love each other like there was no pause." On what planet do you live? In unfortunate reality, love certainly can die, lessen, subside and disappear. As for that meeting in heaven bit, don't even get me started! "Thank you so much for the gifts that you've given me - I thank you + God for the relationship I've been lucky enough to find because of you..." If you found it because of him, why do you feel the need to credit god? "I hope you are happy. I feel that I finally am. I love you S. monkey!" "I love you" really is not very appropriate after all that... am I right? (Deformed jellybean)"Always, Katie."
Whether sincere or secretly malicious, the whole thing was tactless. 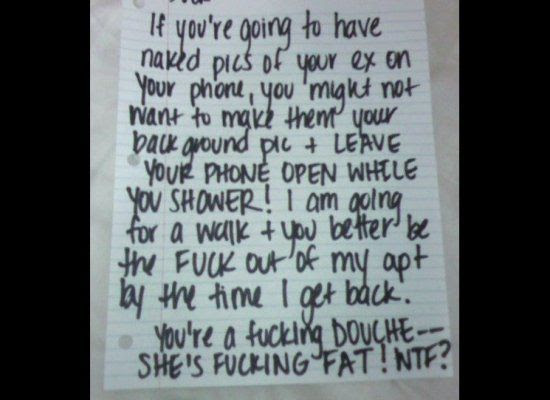 First, any guy who is that stupid deserves whatever he gets. I don't know if this girl was more mad about the pictures in general, or indignant that the other girl was fat. I understand that both might be a slap in the face, but ultimately I think the worst part about this is that he cared so little about his girlfriend that he couldn't even bother with being discrete. I know how that feels! And guys, just in case you didn't know, it's NOT ok to keep naked or revealing pictures of your ex! Women are less likely to do so, but it's not ok for us to do that either! BTW, also not cool to look through your boyfriend/girlfriend's phone!

You know whats scary about this one? She didn't just get 1 billboard, she got AT LEAST 3! I looked around and found 3 pictures of the same message that are for sure 3 different billboards, and another picture that looks like a 4th but might just be a different angle. You know what else is scary? Somebody copied it...

If your going to go all out and get a billboard, why for fuck sake wouldn't you use it to also slander the name of the skank who messed around with your husband? 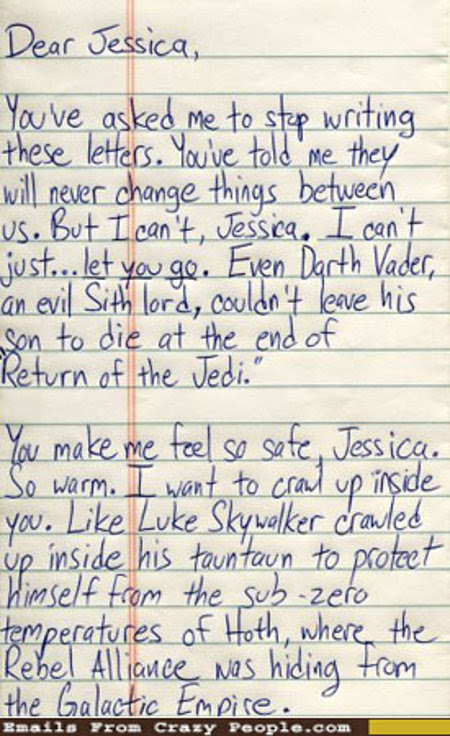 Wow.... was he serious with this? Lets pretend we're watching a movie and somebody gets this letter. Sweet romantic music begins to play at "Dear Jessica" and continues right up through "let you go". At "Darth Vader", the music dies with that old power-down effect and the audience gapes in horror at the sheer awkwardness of the situation. That's pretty much how it went down in my head as I read this.

Oh my god that's cold! After reading those all I could say for a whole minute was "Ooouucchhh!" repeatedly. That is really really harsh... I hope she did something horrible to have deserved that.


Here's a pretty amusing (but rather explicit and fake, probably) divorce letter but you'll need to view image and zoom in, sorry! Make your children leave the room if they can read...

It's pretty bad when you do your best to slander somebody in a break up letter and only end up making yourself look retarded and psychotic, and causing the reader to feel extremely relieved on the behalf of the lucky recipient who is now rid of you. The award for biggest break-up-letter fail EVER goes to the girl who wrote this next letter.

LOL, when I found this picture I right-clicked to find the image info and got this menu: Copy, Select all, Yahoo, View selection source. By accident I hovered over Yahoo, which opened another menu. This one read: Search web for, E-mail this page, IM this page, (and finally, to my extreme amusement) Translate to English. I totally cracked up at "Translate to English", because I had just been thinking Wtf? That's not even English! That is exactly what needs to be done to this letter! and this guy clearly dodged a major bullet, because not only can this girl not even form complete sentences, she appears to be a lunatic as well!
Posted by Alcorn at 7:10 PM No comments:

So saith the venn diagram!

I suppose so, but where the heck did that come from?? 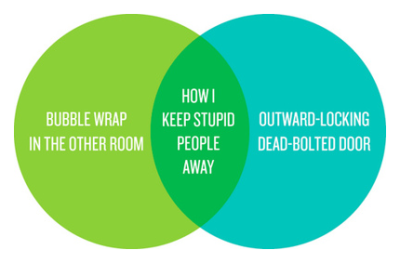 The truth about cops.

For as long as we've had police we've also had delusions about their customs and pass times. I mean really, peace bringing doughnut whores? Please! That's what they want us to think. Luckily for all of you out there still suffering from these misconceptions, I have uncovered the true story* for your benefit. Don't you feel lucky?

*Although this is a real book, the words are NOT the original text. It is meant to be amusing, so take it as entertainment and please don't go getting all butt hurt over fake books or slandering the name of police officers or other such garbage.